Redondo Beach California is a suburban beach town in Los Angeles County, located about 20 miles south of Downtown L.A. in an area known as the South Bay. The city covers a little over 6 square miles and is home to about 67,000 people according to the 2010 census.

Redondo Beach is considered a ‘full-service city’ with its own police, fire, and public works departments, two post offices, two public libraries, and fifteen parks. It’s also well known for offering an abundance of recreational activities to residents and visitors.

Redondo Beach covers over 6 square miles of Los Angeles County. The city is distinctly divided into North and South sections with 190th, Anita, and Herondo streets forming the boundary line between the sections. North Redondo is situated inland, being separated from the beachfront by the cities of Hermosa Beach and Manhattan beach. South Redondo is the ocean side section of the city with approximately 1.5 miles of beachfront.  Hermosa Beach lies just north of South Redondo and the peninsula city of Rancho Palos Verdes is to the south.

The beach life and outdoor recreation reign supreme in South Bay. Residents and visitors enjoy a lifestyle that centers around the beach. Popular activities are surfing, paddle boarding, boating, fishing, beach volleyball, cycling, and neverending beach days. Redondo offers a uniquely mixed urban/suburban environment. Redondo Beach is home to many unique and locally-owned restaurants, bars, coffee shops, and boutiques. There is always something to do, yet the city remains quaint enough for those seeking a more chill living situation. The proximity to Los Angeles and Long Beach allow for quick travel to more urban areas. That means that residents have pretty much any type of lifestyle at their fingertips.

The pier is a major hub for activity. It is one of the largest piers on California’s coast. You will find great restaurants, eateries, bars, and shops. The adjacent marina boardwalk is where you can rent paddleboards, bikes, boats, kayaks, and more. 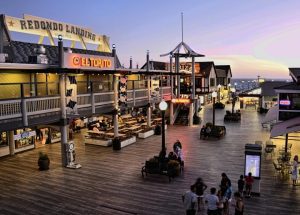 Take the family to Seaside Lagoon.

This waterpark is a great time for the whole family.

Stroll through the Redondo Farmers Market (There are two).

Redondo Beach Certified Farmers Market: Every Thursday from 8:00 am to 1:00 pm. It is located at George Freeth Way and Veterans Park West.

This mall is one of the best around. It is a great place to shop, eat, and entertain yourself and the family for hours.

The Strand is a beach bike/walk path that stretches from Torrance Beach all the way north past Santa Monica. There are several bike rental vendors along the path.

The beach is one of the best around and it doesn’t get too crowded. Don’t forget to pack some food and activities!

The local economy is diverse, steady, and robust.  Recreation, tourism, tech, and manufacturing drive much of the economy. The average income of residents is $53,000 annually, which is nearly double the national average. The unemployment rate (pre-pandemic) is 3.7% and the future job growth rate is under 1%. The income and sales tax rates in this South Bay city are well above the national averages at 8% and 9.5% respectively.

As with most coastal cities, Redondo Beach boasts an active housing market. Homes are well-valued and highly sought after. This includes re-sale homes, new homes, income properties, and the rental market.

The housing market in the North section is slightly different than that of the Southern part of the city. Since North Redondo Beach does not offer beachfront homes, values are slightly lower. Altogether, homes in both zip codes have a median sales price of about $1,200,000. The average time on the market is about 30 days. The average monthly rent amount is about $3,600. 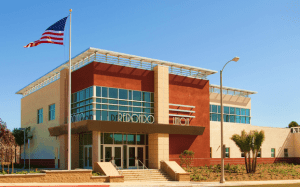 RUHS students are enrolled in a standards-based course of study. Most students complete a rigorous college-prep. program as part of the curriculum. Of the student that complete the program, approximately 97% go on to attend a two-year or four-year college. This Advanced Placement Program continues to grow each year as more students enroll in challenging college-level courses on campus. The program currently offers 18 AP classes in English, Mathematics, Science, Social Studies, Foreign Language, and Visual Arts. RUHS was selected for the AP Achievement List in 2010 to recognize the Advanced Placement Program for increased enrollment and an 83% pass rate on AP examinations.

Redondo Beach has definitely had a place in popular American culture throughout the years. It’s been often used as a filming location for television, movies, and music video. The city has also been mentioned and represented in movies and songs. 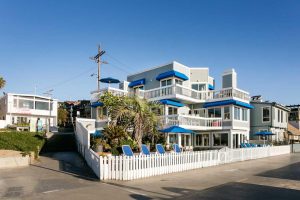