The jungle is a powerful force on the island of Kauai. Rich volcanic soil coupled with ample, warm rain and sunny days fuels prodigious plant growth. So it’s not surprising that when landscape contractor David Brune of Designscape was called in to tackle the neglected gardens at the Dali Hale Estate in Kilauea, he found an overgrown tangle. Little or nothing had been done on the property for three years, and it showed. 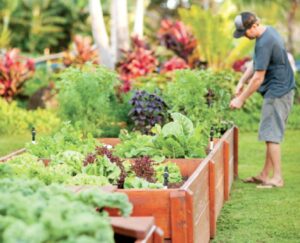 The process of bringing order to the chaos took four arduous months.Brune wanted to celebrate the fact that the garden encircles the
traditional plantation home, lending itself to a stroll garden. Perched atop lush bluffs overlooking the sea on Kauai’s famed North Shore, the property also has spectacular ocean views.
First Brune edited out overgrown and overcrowded plants, opening up space, while at the same time preserving worthy specimens such as the wide variety of palm trees that had been planted by previous owners.

On two sides of the house, the winding grass paths weave through lushly planted, layered garden beds. Brune chose the plants for these beds carefully, picking each with an eye to texture and color. He also selected varieties that would require a minimum of care. “My goal is to create gardens that require the least maintenance possible,” says Brune, although he admitted that in Hawaii, almost any plant requires frequent pruning to keep it in scale to the garden.
The tropical ground cover dragon’s tongue (Hemigraphis repanda ‘Razor’) spills throughout the beds in deep purple pools of narrow-leafed foliage flecked with small white flowers. Fiery magenta ti plants (Cordyline fruticosa); spiky Cordyline australis ‘Torbay Dazzler’ with its creamy white striped foliage with a pink-hued heart; purple-leafed cordyline that echoes the dragon’s tongue; Dracaena and bromeliads (Alcantarea odorata), and brilliantly colored crotons are among the plants that provide background height and structure in the beds. Exclamation points of coconut, foxtail, bottle, and Dypsis pembana palms add additional drama.

Large lumps of pumice and other lava accent the beds, along with imported Indonesian carved stone sculptures and urns. In one bed, a serene Buddha rises out of a pool of dragon’s tongue, and in another, an urn with a typical Bali leaf motif anchors one end. Three monumental solid limestone discs standing upright, each pierced with a large round hole, are clustered in another bed. Brune, who imported the three discs from the island of Sumba, explains that in that culture, these carved, round stones represent wealth. Another Sumba import gracing the garden is a stone pillar that is rich with tribal carving.
Flanking a short flight of steps leading from the driveway into the garden is a pair of solid stone-carved Buddhas, each with an elbow propped on one knee and his head resting on his hand. The finest pieces of sculpture in the garden, they are carved from a gray stone that, as Brune says, “will last forever.” In contrast, Brune explained that green stone turns black and, as the years pass, begins to melt.
To the right at the top of the stairs, the path leads to a small labyrinth paved in gray gravel with the simplified meditative maze outlined in smooth river stones. Beyond the labyrinth is an orchid planted with Haden mango; Sharwil and Yamagata avocados, which were developed especially for Hawaii’s climate; citrus (Meyer lemon, lime, and Key lime); pomegranate; bananas; and lychees. Continue through the orchard, and you’ll come to the tennis court.
Take the path from the front steps to the left toward the ocean side of the house, and you’ll find a wide expanse of emerald-green lawn and a serpentine-shaped swimming pool overlooking the sea. Stepping-stones from the house through the grass also lead to the pool and the contemporary, square gazebo furnished with an upholstered banquette and designer lounge chairs. There, visitors can sit in the shade and enjoy the view down to the private beach below and across the expanse of the blue Pacific to the horizon.

Owner Hula Dahl is a chef based in Los Angeles (visit her blog at ChefHulaDahl.blogspot.com). To provide fresh produce for her when she is in residence, Brune also created a completely organic kitchen garden. There, four raised beds, each measuring twelve feet by five feet by two feet, are planted with a variety of produce, including kale, mixed lettuce, tomatoes, and herbs such as rosemary, oregano, and thyme. The planting schedule and choice of produce is timed so the food is ready for harvest when the owners are there.
The untreated Douglas fir used to create the beds has only about a five-year lifespan; however, it’s less expensive to rebuild the beds when they rot, rather than to use rot-resistant wood such as red cedar or redwood. Treated lumber would be out-of-the-question for the 100 percent organic garden. “Everything rots here,” quipped Brune. “It’s the slow train to death.”

The beds are filled with a custom compost mix of cinder, local sand, and six different organic fertilizers to promote plant health and growth. “I’ve never seen anything grow so fast,” remarked Brune. That’s saying a lot considering the typical growth rate for anything in Hawaii.
With winding paths; lushly planted beds highlighted with Indonesian sculpture and textured, porous lava rocks; fruit-bearing trees and vegetable beds; a swimming pool and gazebo with a 500-foot wide sweep of ocean view; and a labyrinth for private meditation, this three-acre stroll garden provides a never-ending journey through a multitude of beautiful experiences. “Everything flows and is linked,” says Brune. “There are no dead ends.”